With the widespread availability of techniques to assess brain structure and function in mental disease in the middle of the 1980s, interest in neuroimaging in psychiatry rapid ly increased. With the desire to support and nurture this promising branch of biological psychiatry, the International Society for Neuroimaging in Psychiatry (ISNIP) was founded at the 1988 meeting of the CINP in Munich. ISNIP began as a small but dedicated group of psychiatrists active in neuroimaging. With the rising development of the field, the number of clinicians and scientists interested in neuroimaging has increased enormously and ISNIP now counts more than 500 members. 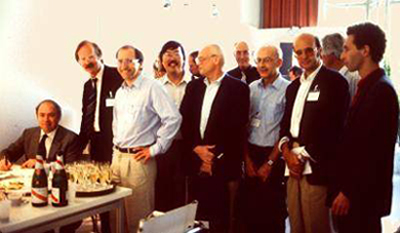 Founding of ISNIP in Munich during the CINP in 1988.

In collaboration with Elsevier Science Publishers ISNIP is proud to have initiated an official society journal that is a valuable resource for scientists in this emerging field: Psychiatry Research: Neuroimaging. Thanks to a generous grant from Rhone-Poulenc Rorer, it was possible to offer a free subscription to all ISNIP members in the first year of publication. A subscription to the journal is now included in ISNIP’s comparatively modest membership fee. Support from corporate donors has helped to keep administrative overheads low. The success of the journal can also be seen in its growth from four issues per year in 1990 to, presently, nine issues per year. The most encouraging indicator of the journal’s success is the continuous growth in its impact factor, approx. 3,45 (2009). In the Journal Citation Report the journal is ranked number 3 in the subjects category Neuroimaging.

ISNIP also has a strong commitment to support scientific meetings. In 2006, the ISNIP-sponsored international symposium took place in Boston, USA. Symposia with which ISNIP has been associated are listed below. Since 2004 the meetings were organized together with the ECNS (EEG and Clinical Neuroscience Society).

Finally, the increasing number of ISNIP members and the above-mentioned rise in the impact factor of ISNIP’s official journal reflect the importance of the field of biological psychiatry attesting to the timeliness of the initiative of a small group of dedicated clinicians and scientists in 1988 to launch the society. With the development of more and more sophisticated techniques to investigate cerebral structure and function, as well as the concomitant accumulation of clues to the pathophysiology of mental diseases, we believe the field of neuroimaging in psychiatry has great potential for continued growth, making it worthwhile to continue with ISNIP and its official journal, Psychiatry Research: Neuroimaging.